Home > Blog > Why is Binance so popular than other exchanges?

Why is Binance so popular than other exchanges? 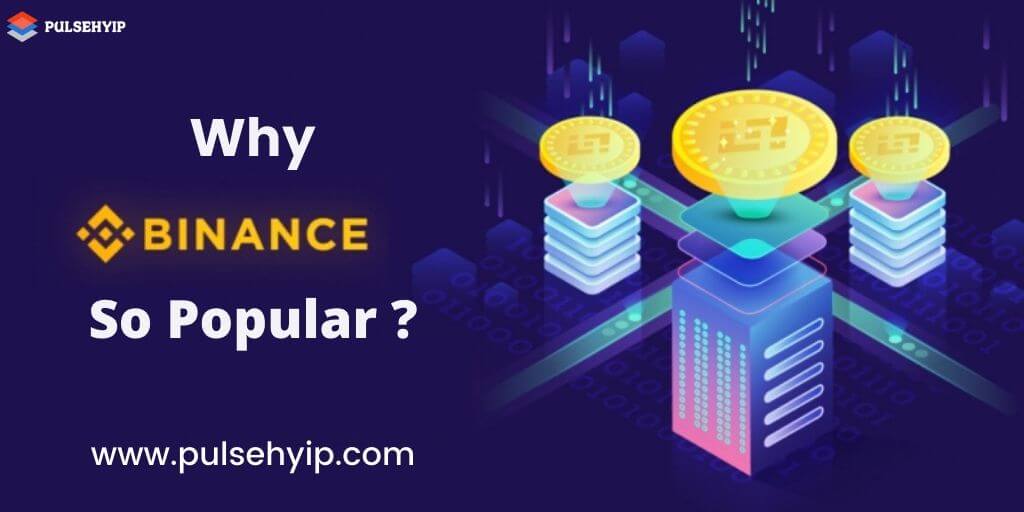 The ever changing crypto market has seen a lot of ups and downs, but thriving in the such crypto market for a longer time is no ordinary thing. “Binance Exchange” is the best example as it has bloomed from a small start-up to number one exchange with respect to the trading volume in the span of two years and has served an average trade of $2Billion USD per day.

It may be astonishing for us but we need to delve into the rise of Binance and why it is popular in order to understand how Binance exchange is harboring well in this competitive and unpredictable market.

Binance was not created abruptly. The founder and the CEO Changpeng Zhao, had his set of experience in the Crypto world before launching Binance in the year 2017. Changpeng was an expertise in building software for brokerages and Exchanges. Along time he got up with blockchain technology while working for blockchain.info in the year 2013. Later, he Co-founded OK Coin, a Chinese Exchange with which he raised near to $15 million in 2017 to launch Binance Exchange.

His previous experience in the Cryptoworld allowed him to make out the need of Crypto users and also the working tactics in Crypto space. This puts the exchange far higher than any other as it was developed based on the requirement of the customers.

The timing launch is something that has to be spoken about. By launching the platform in the mid-2017 it was able to add up and attract new users as the bull market started to take hold. If the launch has happened nine months later than that, probably it would not have grown into a mighty Exchange.

Not only that, the CEO of the company was able to make up a team that arranged and supply the infrastructure Binance needed in order to meet up the market demand. This allowed Binance to scale near to three million users in the first six months of launch.

Just the way mentioned before prioritizing customers need was the first success step of Binance. For Instance, after the launch of Binance, the Chinese government made strict rules that instructed that all ICO (Initial coin offering) Exchanges return funds to their investors and shut down all exchanges.

But Binance went a step ahead by refunding all the original assets at the original investment rate to the Binance users.

This gave a way for Binance to gain a loyal following from crypto community from around the world.

Many, faulted Binance for not providing fiat trading pairs. But there is a reason to it. By not involving fiat currency into the trading system of the exchange, Binance was able to avoid the legal requirements that arises when dealing with fiat currencies of different countries.

Its ability to dodge the governmental regulations allowed it to grow more quickly compared to its competitors. Other than 15 countries around the world Binance was able to serve all.

The Crypto boom has made Binance to capitalize on the number of assets available on its platform. The period where people started to consider each and every Altcoin as the next bitcoin and thus made them to increasingly invest lumps of money on various projects.

Presently, Binance has more than 100 Crypto coins listed in its exchange. It is been suggested that, an value of 400BTC is required to list a new coin on Binance exchange. This is itself a good form of capital for the company to invest back in other services.

Another reason for the growth of Binance was the introduction of BNB. Its launch in the 2017, has proposed multiple uses within the Binance Platform where it is used as an utility token, allowing the users to receive discounts when paying their trading fees, its usage in community votes, permitting its usage outside of Binance etc. makes it more convincing as a trusted Platform.

The integration of BNB has also helped the company to hold a good user count, even during the 2018 crypto crash. Its value and market cap held steady during those difficult phase and its one of the major coin that reached all time high during the Crypto renaissance 2019.

The Concept of IEO is similar to ICO (Inital coin offering) which facilitates Crypto startup to raise capital from investors. The main difference is that, IEO is set off by an exchange rather than the start up team.

This gives assurance to the investors that the exchange has completely researched about the project. It reduces the risk of investors to fall for spammy business.

There is also a provision for the users to invest using BNB and many IEO coins has become established Crypto coins thus making the investors to gain large profits.

Unlike other exchanges, Binance has a well designed and easy to use interface with versions such as mobile and desktop applications. Any beginner can join and begin trading with the help of “Binance Academy”- A free tool for learning about Cypto which is made available on web.

But we need to speak about the 2019 hack also. The response from Binance was immediate and contradictory to any other exchange which has under gone similar situations. Binance was open and honest about it and refunded the customers who had lost their money.

Binance is already hinting us with its investments and vision on decentralized Exchange which will potentially make it much stronger than any other platforms.

Pulsehyip is the best rated Cryptocurrency Exchange Development Company for its services. It provides intriguing features in its Clone scripts to make the clients business a success. Binance clone script helps you to launch an exchange like Binance with more modernistic features.

Get a free consultation from our experts!