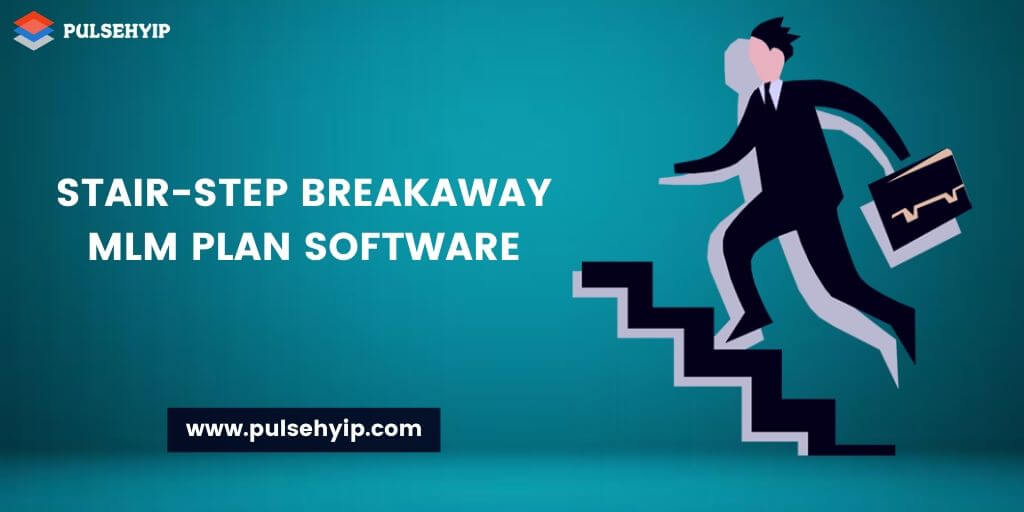 The StairStep Breakaway MLM plan or Stair Step breakaway plan or simply Stair Step MLM Plan is an old form of MLM plan that is still used for its high earning potential. Even though the plan holds a very old process, the advantages that comes out of using it, makes it an eye catcher even in this digital era. With the Stair step plan, one can easily build a network with vast number of front line of distributors.

What is Stair Step MLM Software?

StairStep Breakaway MLM Software is a web application, that allows the business personal to maintain and handle the functionality of Stair Step MLM Plan in his/her business by keeping track of downline’s incomes and expenditure.

The Stair step MLM plan begin like Unilevel MLM plan that allows unlimited number of front line users. As it goes progressively deeper, a percentage is assigned to each level.

Successively as the team grows, a particular rank can be achieved by satisfying requirements such as the volume of the group. The team growth will lead to the breakaway and a member will be getting a small commission in a group instead of maxing out the commission based on the number of levels deep they are in.

In stair step plan the distributors will advance their rank to reach a certain point within the company, thus will help them earn greater commission rate based on their rank. Then they tend to “break away” from their up line and will no longer be part of their upline group. After breaking away, distributor will get even more commissions.

An organization can modify stages with certain objective, which will enable the distributor to grow up to higher stages (stair steps). This will also increase the group sale amount. When the distributor reaches a certain innovative stage, the distributor and his group will breakaway to a certain level from the immediate sponsor therefore providing them an environment to generate more revenue.

In Network marketing, there is usually a front end loading. It includes the larger investment from the supplier end to become the part of the company. This results in the garage full of items. This is been modified in order to reduce the  Inital product Investment.

Getting elevated to each level of the stair step plan is considered as the progression in the position within the company.

Promotion is based on the revenue (individual volume) of the distributor.

When the distributor reaches the top of the stairways, he is then permitted to breakaway from the immediate sponsor.

With each step (rank), the distributor will be refunded for the purchase he generated from the company.

The First Stage- At Sales Professional level, may generate 20% discount

The Second Stage- At Distributor level, may generate 25% discount

The third Stage- At Supervisor level, may generate30% discount

The fourth Stage- At Manager level, may generate 35% discount

The fifth Stage- At National Director level, may generate 40% discount

The discount amount gets improved as the distributor moves to the next level in the marketing. A member has to maintain his/her current position once he gets a promotion for next level for three consecutive months, to earn a once-off title bonus.

At sales Executive level, a member joins the company with a once-off registration fee after which they are placed under a sponsor. The SEL has to then recruit at least 6 new members under him. By the start of the following month, the SEL will then be promoted as Distributor.

Under a Supervisor, at least 8 qualified SELs as well as personally sponsored 3 qualified Distributor can be placed. The time limit will not be a factor of consideration for promotion to next level.

Every time the supervisor generates a “Directly Sponsored” distributor or supervisor within their team, they earn different once-off promotion bonus as per the norms in the company.

Once-off promotion is earned by the manager each time the manager produces directly sponsored distributor or supervisor or manager. Again time limit is not a factor promotion bonus.

A National Director can have 36 qualified SELs, personally sponsored 8 qualified Distributor and personally sponsored supervisor(each of who will have the acceptable volume of team structure).Time limit is not a factor for qualifying as ND. The ND also gets promotion bonus based on the company norms. These bonuses does not have any time limit and ND will get paid every time they promote a directly sponsored Distributor, Supervisor, Manager or National Director.

The Stair Step plan has the best earning potential if we go through its history. The breakaway component of this plan enables a person to build a bigger teams and earn compensation from deeper generation levels. For example, In Unilevel MLM plan allows a member to draw commissions from only 6 levels deep. But in a Stairstep breakaway plan the distributor will be eligible for override compensation on the volume of their entire group, which could potentially be 6 levels deep as well.

The Stair Step MLM plan has no limit on recruiting the number of people for the first generation line. Also there is no limit for the downline distributors to recruit further.

Pulsehyip, the leading MLM Software Development Company believes the creation of a standard MLM business can be started with a featured MLM software script. Availing to one such software script can bring an MLM business to heights in no time as the management will be done effectively with such applications. A secure, reliable and full-featured app for all MLM stair step Compensation plan is made available to you through Pulsehyip.

We also consider in offering the best MLM Software solutions in a cost effective way to enable and encourage the beginners to start such businesses.

Get a free demo for your Stair Step Breakaway Plan!!!