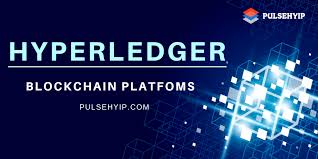 If you have read my previous blog, that I’m sure you will have an idea about Blockchain platforms and how it helps to develop a business application into a secure system.

Blockchain Technology is getting more and more refined with an update of blockchain platforms.

In this Blog, we going to explain in detail about the Top platform Hyperledger and its Frameworks and How Pulsehyip works with Hyperledger platforms.

Hyperledger is the revolution of Blockchain technology, it was launched by Linux foundation. It is a global collaboration, hosted by The Linux Foundation, including leaders in finance, banking, Internet of Things, supply chains, manufacturing, and Technology.

In simpler terms, Hyperledger can be thought of as software which everyone can use to create one's own personalized blockchain service. This software can be used by any developers to hold the industries data for secured manner. This is developed with private blockchain module, on this network only parties can directly be affiliated with the deal which updated on the ledger and notified. Thus it maintains privacy and highly confidential.

This hyper ledger won't supports any Bitcoin or any cryptocurrency. This platform aims to “create an enterprise-grade, open source distributed ledger framework and code base” and create, promote and maintain an open infrastructure. Today Hyperledger has an impressive list of more than 100 members.

Pulsehyip dedicated coder used to develop Hyperledger project with a Solidity programming language, that is intended for writing smart contracts for Ethereum-based blockchains. Solidity's syntax was based on JavaScript, which makes the language easier to pick up c++ and Python.

Hyperledger incubates and promotes a range of business blockchain technologies, and the advance framework types have explained below

Hyperledger Sawtooth - It is contributed by Intel, this blockchain framework utilizes a modular platform for build and run distributed ledgers.

Hyperledger Burrow - It is permissioned smart contract interpreter partially developed to the specification of the Ethereum Virtual Machine (EVM).

Hyperledger Fabric is a blockchain framework which is hosted by the Linux Foundation for developing the application with modular architecture. This Fabric allows components such as consensus and membership services. Hyperledger leverages the technology to host smart contracts which are known as "chaincode" that comprise the application logic of the system.

Because this chaincode is used to interact with the permission member network among the ledger data. Here the membership identity services that manages IDs and authenticates participation.

Maybe the most interesting project in the Hyperledger family is IBM’s Fabric. Which is designed to provide a framework with enterprises can put together their own components of Blockchains. Hyperledger Fabric has invented for to transact the data in the fastest manner. It is in primarily enterprise settings to make a transaction between multiple businesses and more efficient. In this network, we can quickly scale to more than 200 transactions per second.

This Fabric is defined for assets types and consensus protocol, which we can set permission on who can join into the network. There are types of nodes which is Peer and ordering. Here peer nodes execute the verify transaction and the ordering nodes order the propagate transaction. This ledger fabric database fully maintained with current state and a log of transaction.

Hyperledger Sawtooth is an enterprise solution for building, deploying, and running distributed ledgers. It provides an extremely modular and flexible platform for implementing transaction-based updates to a shared state between untrusted parties coordinated by consensus algorithms.

This is mainly designed to keep the ledgers distributed and making smart contract safe, also especially it is used for enterprise maintenance. This application can be a native business logic or a smart contract virtual machine. Sawtooth allows both of these applications to coexist, also it is known to run multiple types of application in one at a time of the blockchain network.

Sawtooth is extremely scalable to withstand the high throughput of data also it comes with a lot of features like;

Distributed - It is a fully decentralized system, all nodes in the network are highly identically informative.

Immutable - Once the data has entered into the blockchain ledger then there is no way to be altered.

Secure - When transactions are made between untrusted parties, they are verified and signed by known identities that are part of the blockchain itself.

Permissioned as well as permissionless infrastructure

Hardware integration - Hyper sawtooth know for ease, which can be integrated with a hardware security solution

Hyperledger Iroha is inspired by Japanese Kaizen principle which eliminates the excessiveness. Iroha has essential functionality for your asset and identity management needs, at the same time being an efficient and trustworthy byzantine fault-tolerant tool for your enterprise needs.

Iroha is different from other solution because it is an open source under Apache 2.0, Linux owns the code which means we can create an application based on Iroha. This solution is easy to understand and quick to deploy. It is the fastest source code it only 10 minutes to start a new Iroha node. All these commands are safe and tested by professionals. Also, Iroha based applications support different languages.

Hyperledger Burrow is for to develops a permissible smart contract machine along with the specification of Ethereum. Hyperledger Burrow provides the modular blockchain platform with the specification of Ethereum Virtual Machine. Burrow has founded for the advances speed transaction which can steadily process upwards of 300 transactions per second. This speed dimension for smart contract focused on blockchains which is largely a misnomer.

The second dimension is the speed at which blocks are propagated within the network. Hyperledger Burrow’s block time is tunable, but by default produces blocks every two seconds. It is built with the capabilities based permissioning system offers users easy access to a structured permission system.

Hyperledger is relatively straight forward to understand. So, We Pulsehyip are having the best developing coded geeks are here to build your business with the blockchain system. Our advanced developing system used to build a decentralized application with Hyperledger projects. Which gets utilized to build in many enterprises.

Pulsehyip is here to serve the top leading blockchain development solution, which used to create with hyperledger projects for business industries.

Business & Finance - Pulsehyip Hyperledger’s end vision is to create the foundational infrastructure that will empower the enterprise with distributed ledger applications and allow it for a decentralized solution. We offered to build the finances solution with hyperledger fabric, we allow B2B contract which Business contracts can be codified to allow two or more parties to automate contractual agreements in a trusted way.

Also, we offer for various industries like Trading, Online Shopping, Healthcare, Real estate, Warehouse and so on…